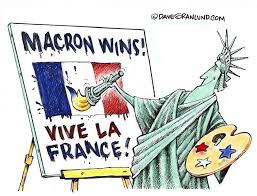 There is an old story about the serious French thinker who, when presented with a common-sense solution to a problem, will find fault by retorting that the idea “works in practice but not in theory.” And there is some truth to the notion that in the land of Descartes, logical clarity bordering on ideological rigidity has had more of a hold on voters than in most Western democracies.

No more. With the election yesterday by a nearly two to one margin of the liberal, centrist candidate Emmanuel Macron over the far-right, nationalist Marine Le Pen as President of France, the French have made a strong choice in favor of pragmatic, flexible, and bottom-up governance. A form of leadership that will start with values, agreements, and institutions that exist—economic openness, the euro, the European Union—and reform and redefine them in ways that help the French to master the challenges of globalization more effectively.

To put the French election in context, the Brexit vote last June in the UK to leave the European Union (“Take Back Control”) and the U.S. presidential election in November (“America First”) were widely seen as the start of a wave of nationalist withdrawal from international commitments. But in the subsequent electoral tests in Austria, the Netherlands, and most important of all, now in France, the far right has been defeated. There has been a welcome return to a realism based on the idea that international engagement with like-minded countries is the only way to foster security and prosperity in an interconnected world.

One defining theme of Macron’s campaign was the rejection of Le Pen’s idea that a reassertion of French independence would be the magic bullet to solve the country’s problems. What Macron understands—and what British Brexiteers do not—is that maximizing de jure sovereignty is no guarantee of greater national security or prosperity. It is important to ask: will the UK be more or less able to defend itself against cyberattacks or terrorist threats once it is outside the EU? Would the freedom not to be subject to decisions of the European Court of Justice really compensate the economic losses from pulling out of the EU’s single market, customs union, and free trade agreements?

As Germany’s chancellor Angela Merkel heads into her own federal elections in September she will feel she has the wind at her back with the victory of Macron across the Rhine. Whether she or her Social Democratic rival Martin Schulz wins in Germany, there is an important opportunity to reignite the Franco-German motor that has historically been responsible for progress in the European Union. Macron is likely to embark upon politically unpopular reforms to French labor, product, and services markets once he takes office. While these steps to make France more innovation-friendly will boost its economic output in the long run, in the short run they could depress growth. Macron will need all the help he can get from Germany, both in terms of policies and political communication, to ensure his success. Failure is not an option.