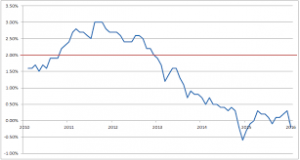 Recently the German minister for finance Wolfgang Schaüble has criticized the European Central Bank: “the policy of zero interest rates is an attack on the savings of millions of Germans who have put their money in savings accounts or life insurance”. He implies this is to blame for the rise of the euro-sceptic “Alternative for Germany” Party. Concretely, the minister takes aim at the ECB’s zero reference rate and negative deposit rate (-0,4%). The Central Bank has chosen this policy of negative rates. By penalizing deposits, it pushes the commercial banks to recycle them into credit favorable to growth; a direct pressure in the form of ‘loan or lose’.

The negative rates are attracting broader criticism. Economists fear a destabilization of the financial system as other players, notably life insurance companies, take on more risk in order to preserve returns for investors. Entrepreneurs point to a lack of faith in the future and an obsession with security, seen in a preference for liquidity over all other forms of investment.   Moralists alarm themselves with the reversal of values: payment for borrowing!  The value given to time by the economy and classical ethics appears to waiver in the face of this fast spreading phenomenon: 40% of the European sovereign obligations are now traded with negative rates for longer and longer periods and major companies reimburse less than they borrow.

Is ECB’s policy solely to blame? With his political attack, the German minister refuses to see a substantial trend that has escaped the control of monetary authorities.  In all aging countries, there is a downward trend for demand, a trend accentuated in Europe by other long term trends of unemployment, inequality and, in certain cases, the bottoming of salaries. Economists say weak growth is only compatible with (very) low rates.

The situation is profoundly new because the effects of depressed demand are compounded by the policies which led us out of the global financial crisis of 2008; that is to say, the creation of a huge money supply modestly called “quantitative easing”. The balance between investment and savings has been disrupted and the demand for credit is way below the available money. It would take a wave of investment (preferably private in order not to aggravate public debt) to increase rates. For now, nothing has been announced. While waiting, excessive savings are available for too few secure investments, depressing the returns until they are rendered negative.

Insufficient secure investments, insufficient demand, insufficient risk, insufficient confidence in the future; we can describe the many facets of this phenomenon but the effect is the same: the “loss of value”. It is easy to see that the debate on negative rates is not solely economic, it is above all political and it is encapsulated in one question, the same arising for each crisis: who will be ruined? At whose expense will we turn around this excess of savings?  The response, feared by Schaüble, seems clear: at the expense of those who have saved.

This is very much a silent revolution. As in all revolutions, it’s about the redistribution of capital where the profits have become untenable. Today, there are savings that we no longer know how to reward. There will be winners and losers. Schaüble well understands that he represents some of those affected.

For over 30 years, the monetary economy supported growth and widespread innovation. But its limits have become clear since the carnage of 2008.  Among its defects, one has been fatal:  it has put on the shoulders of younger generations a wall of debt. Continuing with negative interest would alter this for the benefit of younger generations. They would have their allies, notably taxpayers for whom the rise of rates would result in a further blow.

The future of negative interest is everyone’s issue.  We are in a new paradigm where we must question our behavior in weak growth, the role of money in the economy, the place of finance in society and the value of time (which climate change is already changing). Saying that the future is intrinsically positive and merits a positive interest rate is not enough. It is the new opportunities and the choices we make which will dictate the quality of that future.